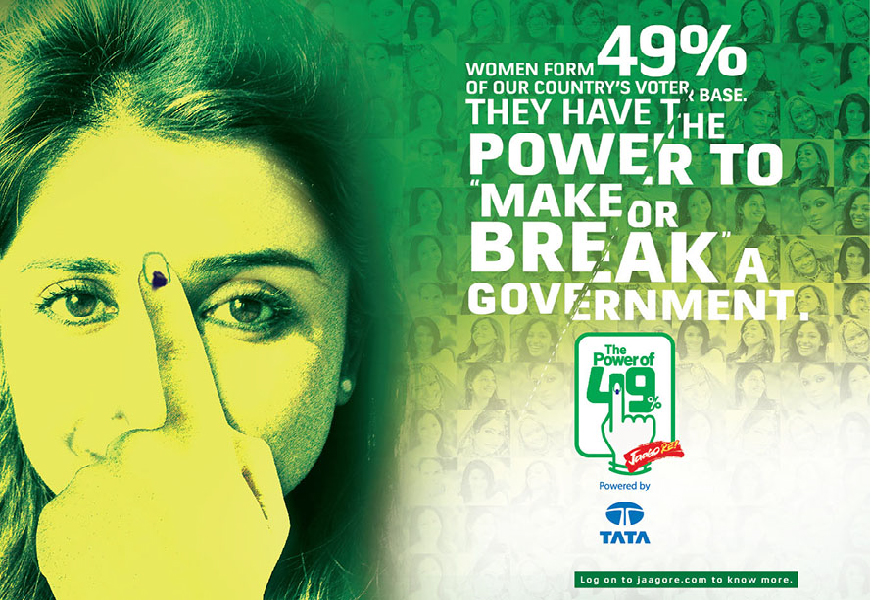 Tata Tea Jaago Re or JaagoRe is a cause marketing initiative launched in India by Tata Tea, owned by Tata Global Beverages Limited. The campaign, introduced in 2008, works with NGOs and other non-profit organization to raise awareness for specific causes around Indian general elections.

Power of 49, a Jaago Re initiative for women, was launched in August 2013 with an objective to awaken women, who form 49% of India’s voter base, inspiring them to cast an informed and independent vote and exercise the power they have to make or break a government in this forthcoming election. The campaign was conceptualized from the insight that women constitute 49% of the vote base in India, but often do not get their due as they are not seen as a determining factor in elections.

As the TG is youth, the communication channels were WhatsApp, Facebook, and SMS.

So the task at hand for Tata Tea this time around was to ‘awaken the awakened!’ And to awaken these oblivious mind-sets, we had to tell them about the power of voting and the change they can bring about.

CIL offered Missed call and interactive automated IVR for interested women offering voting help and guidance through IVR. With this, CIL also provided mapping of Pincode and shared profile of candidates who were contesting election. With this, brand also received custom reporting based on in-depth analytics from CIL.